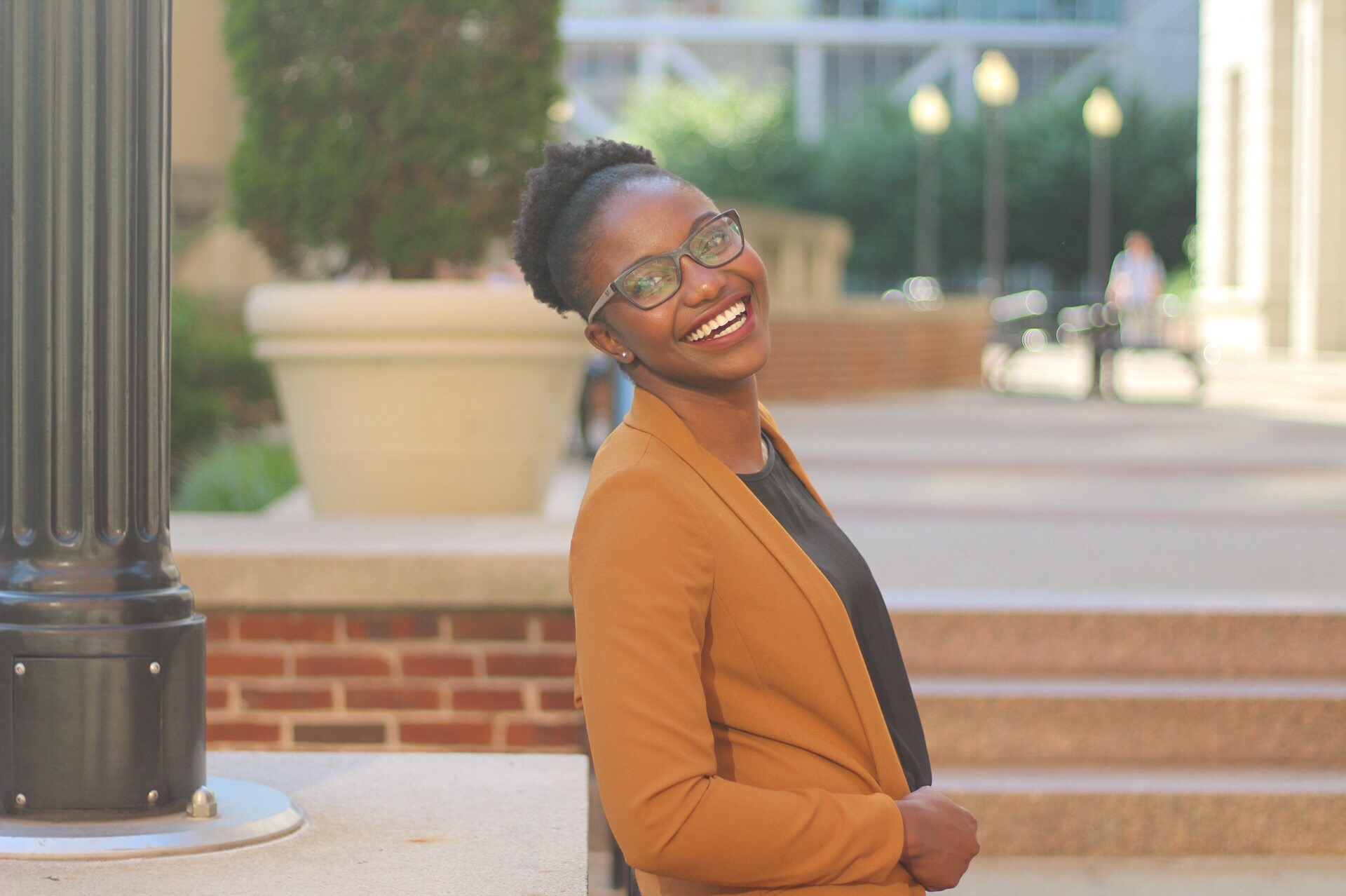 “Every person you meet is vital to your journey, and 1 By 1 was vital to my journey.”

‍
Regine Francois was four years old when her family immigrated from Haiti to America. From a young age, she watched her parents evolve from humble beginnings as they settled into the town of Immokalee. When they first arrived, her father started picking peppers in the fields. Later, he shifted to construction work for several years. Meanwhile, her mother held a job as a housekeeper and later became a CNA. However, as a migrant family, they struggled to navigate American culture and fought to make ends meet. Nevertheless, Regine's parents held onto hope that their children would manifest brighter futures. But, as the oldest of six, Regine felt the weight of the world on her shoulders.

Growing up as an underrepresented minority, Regine faced hardships every day. Food insecurity, lack of resources, language barriers, and her academics were especially strained as she and her family navigated a new life. Although these challenges tested her, she relied on her faith in God and setting an endless number of goals to propel her forward. Some of her goals included: single-handedly solving world hunger, running two companies, becoming an obstetrician, starting a non-profit mentoring program, breaking cross-country records, and even being the top reader every year in her school. With such lofty aspirations, she would have to prove herself every step of the way. When she reached high school, she immediately put her nose to the grindstone. Regine quickly pursued multiple extracurriculars, tutoring programs, and mentoring programs, including programs offered by 1 By 1.

When Regine found 1 By 1, her schedule was brimming with activities. At that time, she had started taking dual-enrollment classes at I-Tech and worked two part-time jobs. On top of that, Regine was preparing to spend her Junior and Senior years of high school at Florida Gulf Coast University. As overwhelming as her schedule was, Regine’s successes in school helped take her mind off a difficult home life, so school became her safe space. Also, as the oldest child, she often found herself searching for support where there was none. Because she had no mentor, Regine was navigating life with a sense of loneliness and started losing faith. However, in Regine’s time of need, 1 By 1’s mentors Sinclaire Williams and Marie Capita welcomed her into one of their newest programs, Taste of Immokalee. Excited for a new challenge on the horizon, Regine jumped into the pioneering entrepreneurial program. Exuberant, she and her 1 By 1 peers started brainstorming ideas for a company that symbolized Immokalee. Together in a small room, the students hashed out a plan, unaware that their small company would alter Immokalee's future.

“It was a few kids from Immokalee that started their own company.”

‍
The first tomato salsa they made was more like a tomato smoothie, but Regine and her peers persevered. Soon, with their recipe perfected, they launched into pitching their product to CEOs and found a spot on the shelves at Publix grocery stores. Although the program started with a mere handful of devoted students and mentors, Taste of Immokalee soon grew into a student-run entrepreneurship program that continues to benefit many 1 By 1 students. Through her involvement with Taste of Immokalee, Regine realized how heavily invested 1 By 1’s mentors were in Immokalee’s future generations. Also, witnessing 1 By 1’s commitment to their students’ personal growth and academic success inspired Regine to restore her faith. At a time when she struggled most, 1 By 1 lent their hand to help Regine find her inner radiance.

“Now I know that I’m not the only one who believes in me.”

As Regine continued working hard to meet her goals, she continued to volunteer for 1 By 1 programs. One program she adored was the Meals of Hope event. Spurred on by her desire to end world hunger, Regine assisted 1 By 1 in packaging 40,000 meals in one day. Alongside her volunteer work and busy school schedule, Regine also joined her peers at various Publix venues or at Ave Maria festivals to sample their salsa. Through continued entrepreneurial efforts, the Taste of Immokalee salsa expanded from just fifty-six stores to several hundred stores across Florida. As she continued to absorb every ounce of wisdom, counsel, and encouragement from Sinclaire Williams and Marie Capita, she graduated FGCU with her Associates. However, her journey was far from over as she set out for Columbia University to finish her education.

“God is very intentional with the people you meet, the paths you cross, the connections you have; it’s all for something.”

In 2019, Regine graduated with her Bachelors in sociology from Columbia. Soon afterwards, she flew to San Francisco to start a new life out west. Today, Regine works full-time at the San Francisco University campus ministry. There, she leads Bible studies, women's groups, preaching, and organizing community outreach events for the homeless and at senior citizen homes. Although she still has many goals, her focus now is to help people build their relationship with God. From her humble beginnings in Immokalee high school, Regine worked hard to defy expectations. With the support of 1 By 1, she became a trailblazer and set the standard for her siblings. Regine believes programs like 1 By 1 are valuable for students. She insists, “Having stable people in communities that students can go to for limitless belief and faith helps them do limitless things&quot;. Her mentors, Sinclaire and Marie, still keep in touch, sending her prayers and encouragement as she pursues her dream.